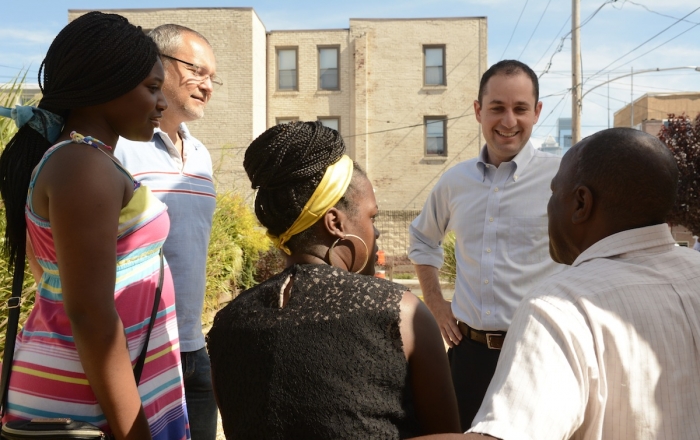 As an active community member, Ori Feibush sees the challenges in Philadelphia neighborhoods first-hand. Owning a small business, he has overcome numerous obstacles to achieve success. That drive toward success, which he would like to apply toward the entire 2nd Council District, can be traced back to Ori’s childhood.

Growing up, Ori watched his immigrant parents struggle in the “Land of Opportunity,” experiencing layoffs and relocations while chasing the American Dream. Unwilling to let those circumstances overwhelm their family, Ori’s parents taught him to persevere in the face of unexpected and seemingly insurmountable challenges.  Those lessons fueled Ori’s determination to succeed as he grew older.

A college education required hard work both in and out of the classroom. Ori took out student loans and worked through four years at Temple, eventually graduating at the top of his class. Post-college, he saved his money and began to look for a place to set down roots with his first home. That’s when he moved to Dorrance Street in Point Breeze, falling in love with the neighborhood – the people, the history, and the sense of community.

But Point Breeze was no paradise. The neighborhood had suffered greatly from years of neglect and poor public policies.  Despite his efforts to clean the block he lived on with his new neighbors, the problems on Dorrance Street required more than just picking up trash. He worked with then-Councilwoman Verna’s office to demolish several blighted homes on the block. Afterward, he personally fenced in the newly vacant lots, installed new lights, and installed outdoor security cameras. These efforts had a dramatic impact, improving safety and the quality of life for Ori and his neighbors.

Using his experiences on Dorrance Street as inspiration, Ori founded OCF Realty in 2008.  Through the development side of his office, he has constructed numerous homes and storefronts that were once vacant and/or blighted eyesores.  He also opened three OCF Coffee House locations to provide new gathering places in different neighborhoods and improve commercial corridors.  Combined, OCF companies have hired more than seventy-five local employees, each paid above the minimum wage and offered matching retirement plans, health, vision, and dental coverage.

Ori’s commitment to others’ well-being goes far beyond what he provides for his employees – it’s evident in his efforts throughout the 2nd Council District.  Ori actively partners with local parent groups, donating time, money, and resources to improve neighborhood schools such as Childs Elementary, E.M. Stanton, and Chester A. Arthur. He promotes the growth of youth programs by working with the Sigma Nu Sharks and other local youth sports programs.  He also continues to fight for the revitalization of businesses along the South Street West and Point Breeze Avenue commercial corridors through the South Street West Business Association and his recently founded Point Breeze Community Development Corporation.

Businesses and residents need cleaner, safer neighborhoods for healthy growth as well.  For that reason, Ori has cleaned up dozens of city-owned trash-filled lots on blocks throughout the 2nd Council District. In one notable case, he spent thousands of dollars to replace twenty tons of debris on a blighted City-owned property with picnic tables and greenery.  This transformed a hazardous environment into a place where new and old neighbors congregate and interact daily.

In addition to his efforts to clean and green his neighborhoods, Ori has installed more than a hundred safety cameras throughout the 2nd Council District.  The value of these cameras was recently demonstrated when one helped police catch a murderer near Rittenhouse Square and another helped police identify an armed robber in South Philadelphia.

Ori’s approach to strengthening communities has proven results, and now he wants to take that same approach to fight for your interests in City Hall.  As your Councilman, Ori Feibush will be accessible and accountable.  He will fight to continue the improvement of every neighborhood in the district.  He will work hard, he will be persistent, and he will not back down.